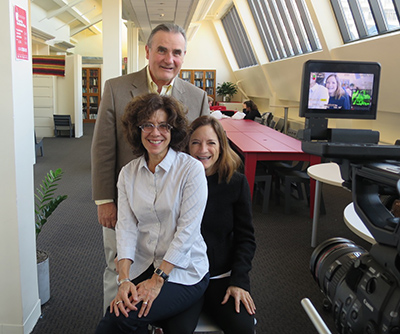 Award-winning filmmaker and show-runner, Janice Engel has made numerous documentaries, non-fiction television specials and series including: Jackson Browne: Going Home, (Cable Ace-Award), Ted Hawkins Amazing Grace, (Rose D’Or Special Jury Prize) and the docu-series, Addicted, (Prism Award.)  Under her own banner, she co-created What We Carry, an ongoing multi-media documentary series dedicated to preserving Holocaust survivors’ stories. Premiered at The Simon Wiesenthal Museum of Tolerance in Los Angeles and housed in the permanent collection at Yad Vashem in Jerusalem, What We Carry has been viewed by 50,000 + people.

Janice is a professor at Academy of Art University, San Francisco, where she teaches documentary film. She is a member of the International Documentary Association and the Academy of Television Arts & Sciences. A longtime resident of Los Angeles, she enjoys her tenure as Vice-President of the Barnsdall Art Park Foundation and lives in Los Feliz with her wife and two dogs.

Professor James Egan is an award winning producer, screenwriter,  currently serving as the Executive Director Immersive Technology at the Academy of Art University. He is also CEO of Wild at Heart Films, a film and VR production company founded to create “Media that Makes a Difference” including Spirit Award winning, Jackpot (2001),co-produced with Participant Media the documentary Angels in the Dust (2007), with Mike Figgis Executive Produced Kimjongilia (2009), and Sound of Redemption (2014) partnered with international best seller, Michael Connelly. Wild at Heart films has also produced The Defector directed by Oscar winner, Mark Harris. James was the editor of “John Waters Interviews”, a book in the prestigious series, Conversations with Filmmakers.

Carlisle Vandervoort is a born and bred Houstonian, whom after successful careers in both film production and promotions/public relations in NYC and LA, returned to Houston. Carlisle shares much with Molly Ivins in addition to the trappings of a privileged childhood of private schools and the debutante party circuit. Both had family involved in backroom business dealings in the oil and gas business during the 1960’s as that industry was coming of age. Activism runs deep in Carlisle’s roots and she invokes the true Texas spirit that Molly Ivins embodied. Her paternal grandmother took on the race issue in Houston in the 1950’s and 1960’s as an early advocate of school integration while serving on the Houston School Board. This position resulted in vitriolic hate mail and cross burnings in her front yard. Continuing in her grandmother’s shoes, Carlisle has been a GLBT rights activist for near 3 decades.

Monique “Mo” Zavistovski is a native New Yorker whose work has won awards worldwide. She got her start assisting Kate Amend on the Peabody Award-winning “Beah: A Black Woman Speaks” (2002) and has since produced and edited “The Wraith of Cobble Hill” (2006), which won the Jury Prize in Short Filmmaking at Sundance and was short-listed for the Academy Awards. She cut the Emmy Award-winning film “The Legend of Pancho Barnes and the Happy Bottom Riding Club” (2010) and Sundance’s Film Forward selection “The Light In Her Eyes” (POV, 2012). Monique’s more recent work includes “Limited Partnership” (IDA’s Humanitas Award Winner, Independent Lens, 2015), “Abortion: Stories Women Tell” (HBO, 2016), “CITY 40” (Netflix; Emmy Award Nominee, 2017), and “Served Like a Girl” (SXSW, Independent Lens, 2018).

Amber Howell has produced, directed, and written numerous documentaries, non-fiction specials, television and film projects, web and experiential content for over seventeen years.  She has helped create programming for networks such as CBS, PBS, Discovery, and OWN.  She developed a documentary based on the best-selling book On Gold Mountain with author Lisa See for PBS, a five-part fiction series Ghost Tales for A&E, as well as several independent scripts.  She was a producer on Craft in America, the Peabody Award-winning, Emmy-nominated documentary series about artists for PBS, and an installment for American Masters entitled Carol Burnett: A Woman of Character, which was awarded a Silver Telly, and Extraordinary Moms for OWN, hosted by Julia Roberts, and included Hillary Clinton and Christiane Amanpour.  Since 2010 she has been producing and writing a series of films, What We Carry, about holocaust survivors. Designed for schools, this interactive project address’ the issue of what happens when there are no longer survivors alive to share their stories in person.  In addition to Raise Hell, she is currently in post-production on her eighth film for that series.

Maryedith Burrell is a 35-year show business veteran.  With over 22 films to her credit, an overall deal at Disney Studios and several TV series, she has garnered awards for screenwriting and producing both in the U.S. and England.  Trained at The American Conservatory Theatre, The Royal Shakespeare Company, The Groundlings and Second City, her recent theatrical work,  #OUCH!: An accidental comedy, played to sold-out houses and won The New York Times “Top Ten.” She has collaborated with Janice Engel on several documentaries, is an adjunct professor at UNCA and WCU, and is also a sought after conservatory lecturer.   Ms. Burrell is currently working on a short story collection, Garlic Girl and her essay “An Affair To Forget” appears in the best-seller, What Was I Thinking?.  She has also written for Vogue, American Express, Rolling Stone, The Los Angeles Times, The San Francisco Chronicle and The Great Smokies Review

Kate Amend is the editor of the Academy Award-winning documentary features The Long Way Home (1998) and Into The Arms of Strangers: Stories of the Kindertransport (2001) for which she received the American Cinema Editors’ Eddie award. She teaches fiction and documentary production courses for USC’s School of Cinematic Arts. Amend edited the 2001 Oscar-nominated documentary short On Tiptoe: Gentle Steps to Freedom and the Peabody Award winner Beah: A Black Woman Speaks. She is a frequent advisor at the Sundance Institute’s Documentary Storytelling Lab and the National Association of Latino Independent Producers’ Academy.